Gross is located in the world class highly prospective Gross Region in the southwest of the Russian Federation’s Republic of Sakha (Yakutia). 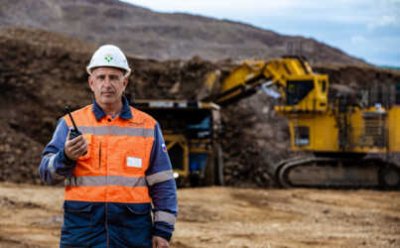 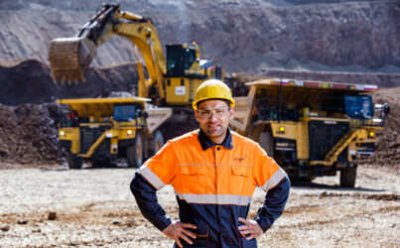 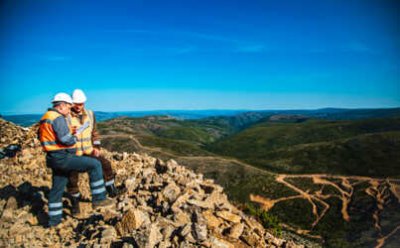 Gross provides a solid foundation for Nordgold’s current performance and is central to our longer term production profile.

Gross is the third greenfield project developed by Nordgold from exploration to production since 2013, cementing the Company’s position as a leading developer of world-class gold mines.

The Gross mine is an open pit heap leach operation accessible by an all-season road from the Ikabya station on the BAM railway (80 km away). 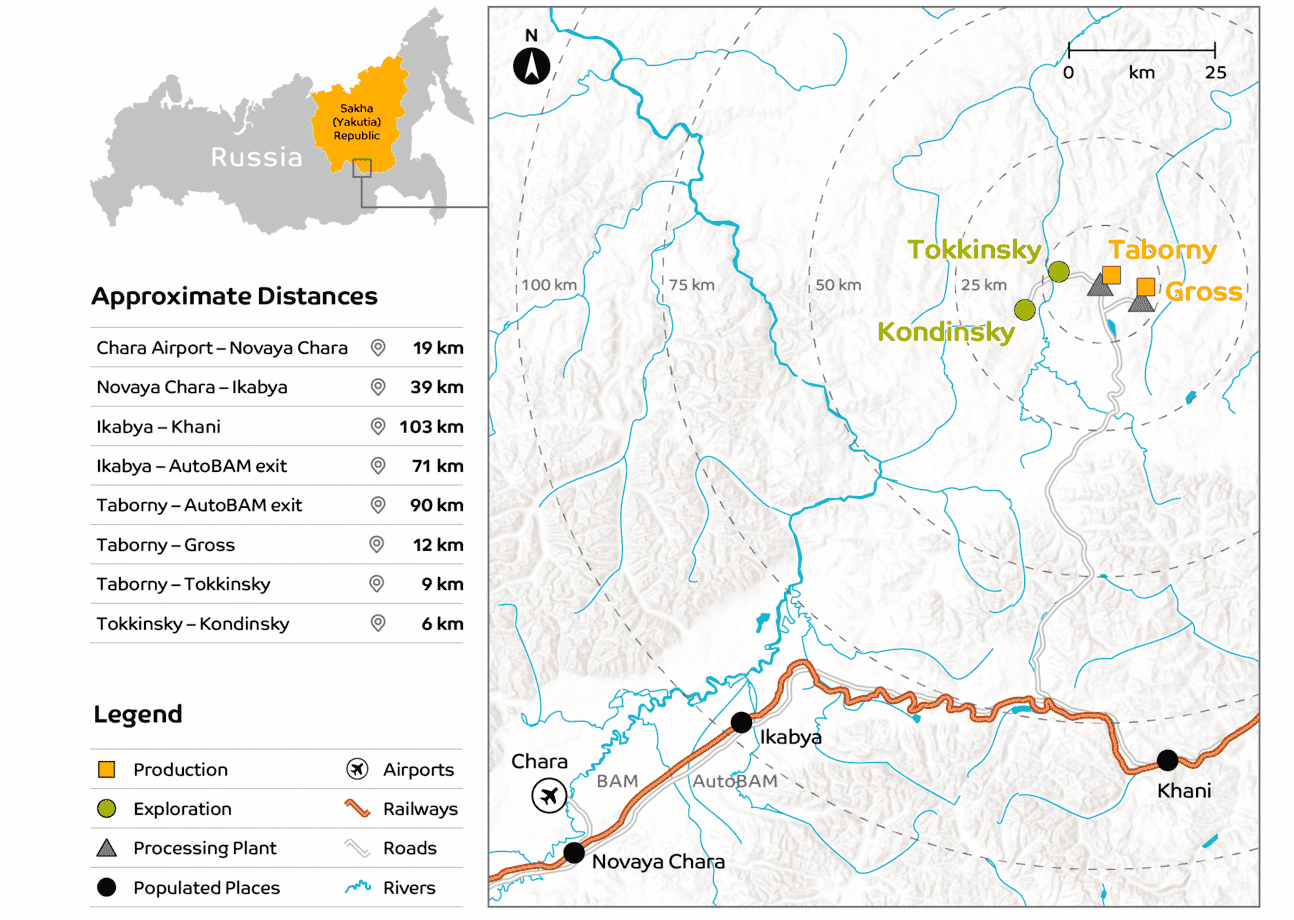 Launched in 2018 with the nameplate capacity of 12 million tonnes of ore per year (mtpa), the Gross mine has developed quickly to become Nordgold’s largest mine, and one of the largest gold mining operations in Sakha Republic.

Completed in September 2021 on time and ahead of budget. As a result, Gross mining and processing capacity increased to 18 mtpa, up from 16 mtpa in 2020.

Expected to increase mining and processing capacity of the Gross mine to 26 mtpa. 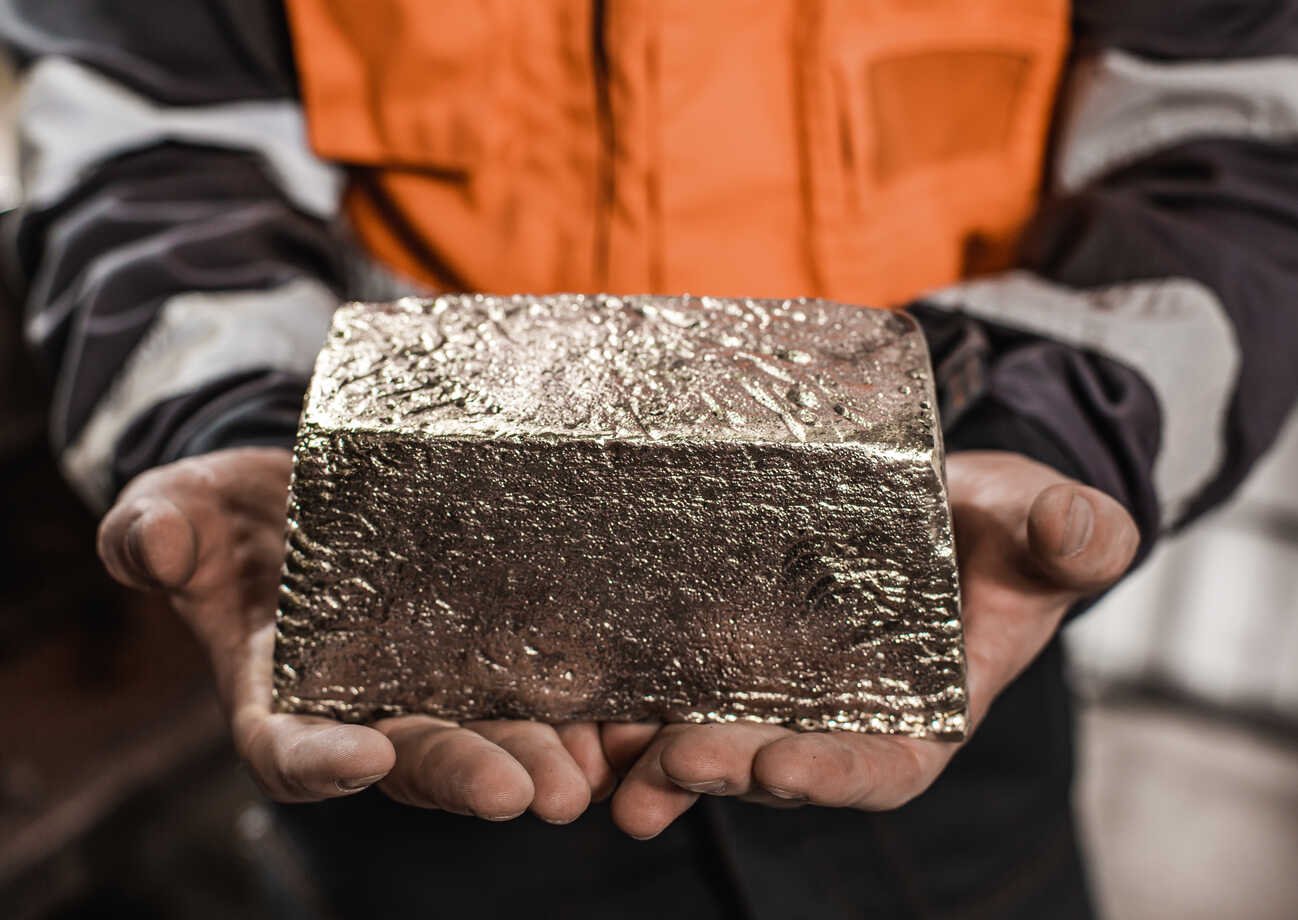 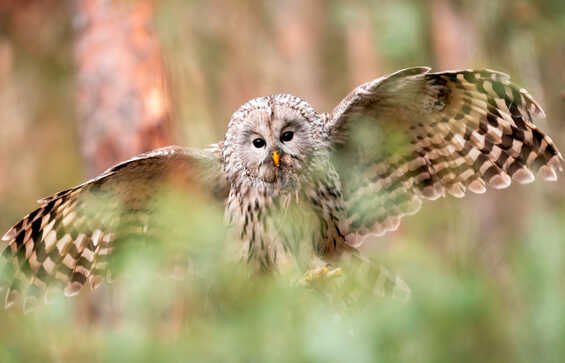 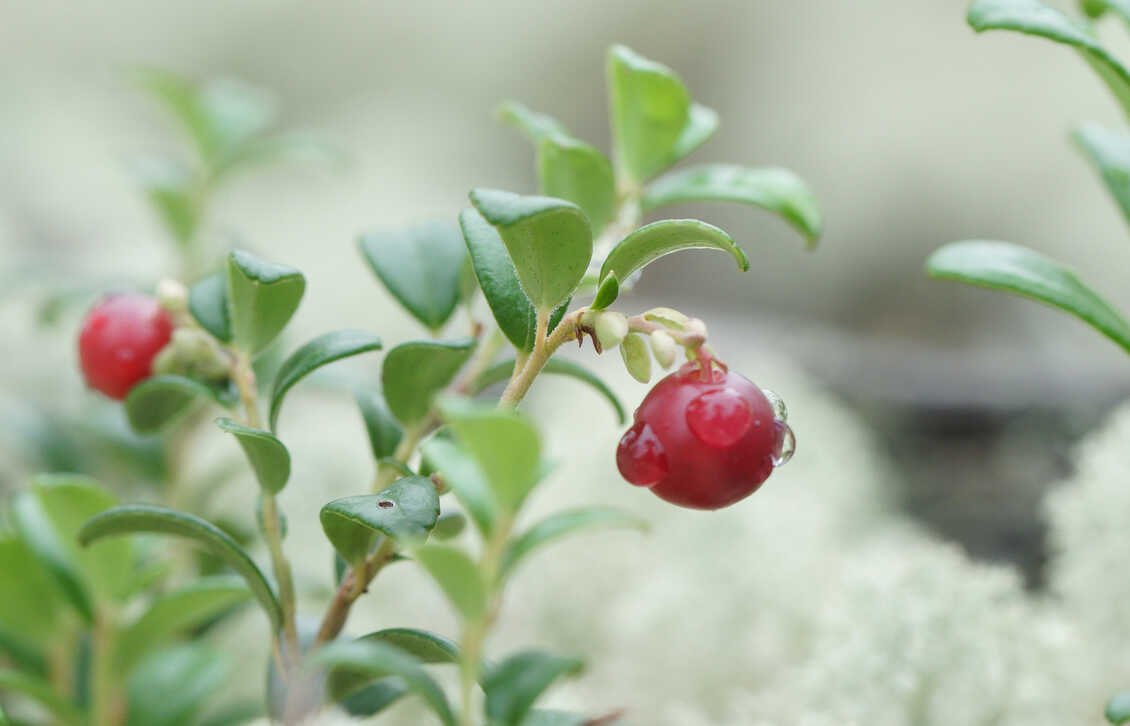 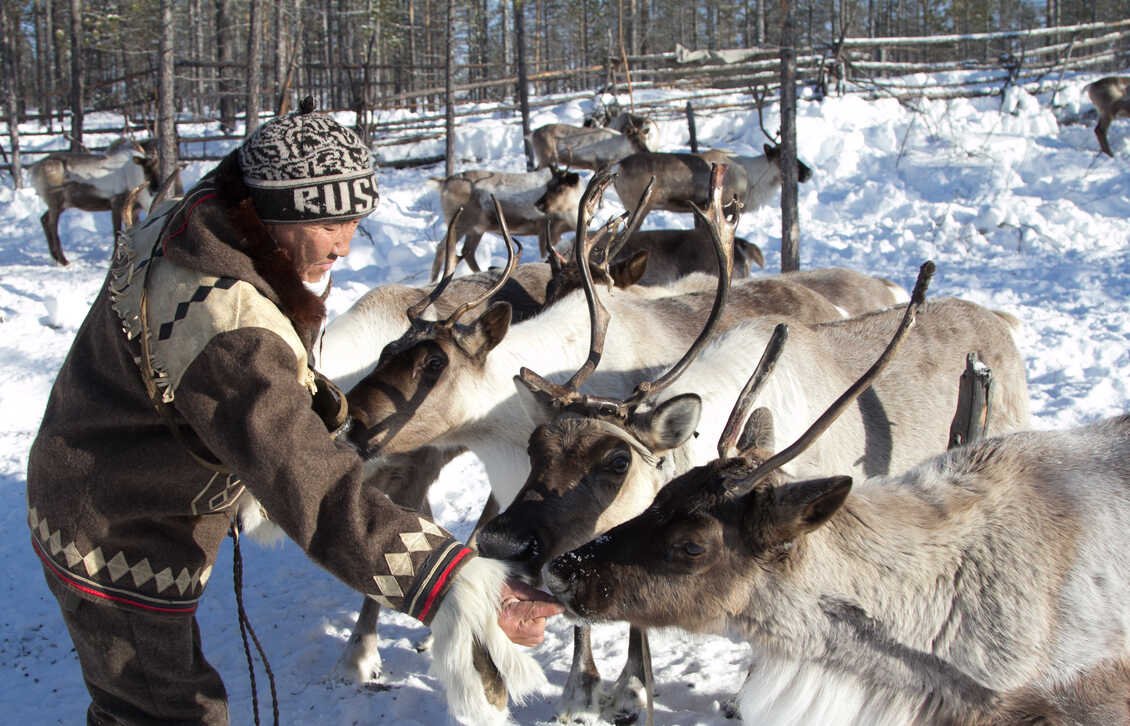 Nordgold updates on ESG initiatives in the Gross Region 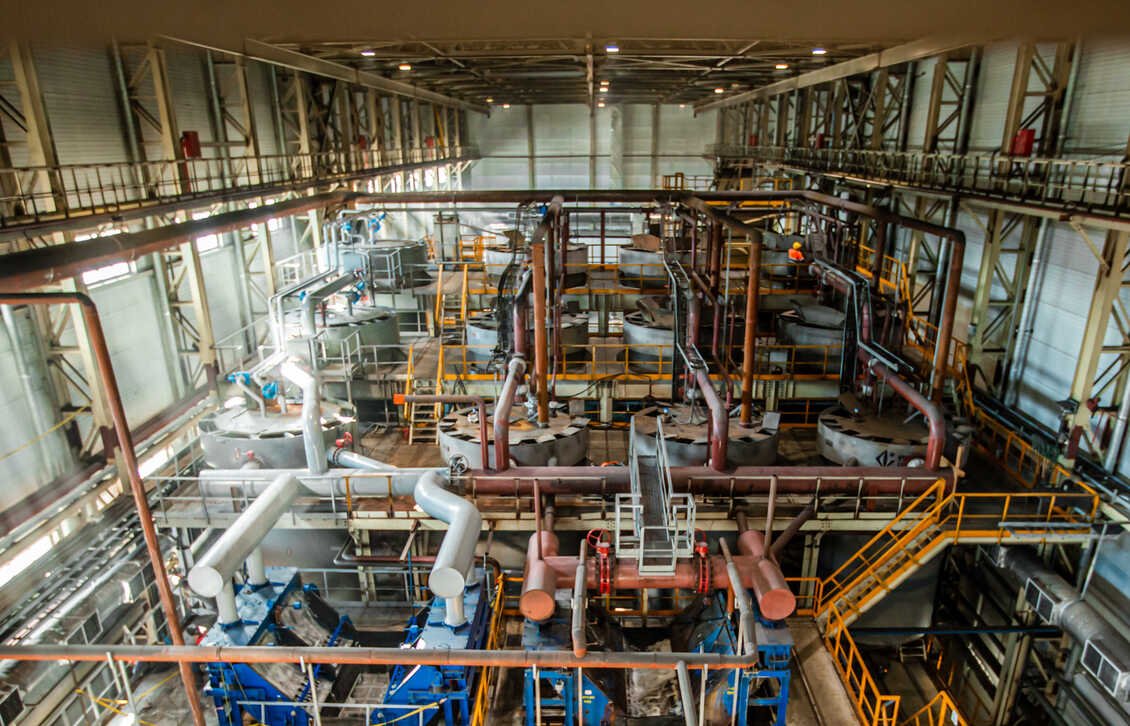 Mining
Gross is a conventional single open pit gold mine utilising a standard mining method consisting of drilling, blasting, loading, hauling, dumping, and stockpiling. All mining fleets at the Gross mine are equipped with a WENCO Automated Fleet Management System, which enables the continuous improvement of the equipment dispatching process, in turn increasing productivity and reducing idle-time costs. 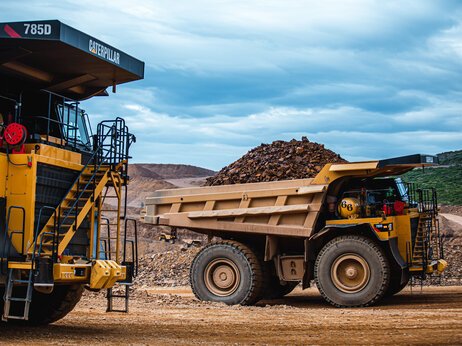 Crushing and
sorting circuit
Gross has a two-stage gyratory and cone crushing circuit. The crushed ore is transported to the leach pad using a series of overland conveyors, feeding onto mobile grasshopper conveyors and finally to a radial stacker. 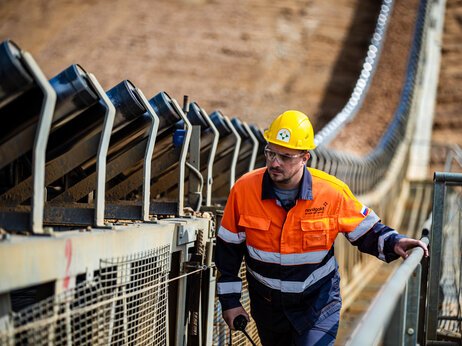 Gross utilises a simple, capex-light and low-cost heap-leach processing method, due to the favorable metallurgical properties of the highly oxidised low-grade ore.

Gross also uses a dynamic leach pad divided into ten panel, meaning there is a permanent pad onto which ore is stacked for leaching. At the conclusion of the leach cycle, the leached ore is reclaimed and safely stored at a separate waste storage facility.

The leach solution at Gross is heated to largely eliminate the impact from low winter temperatures on leach kinetics. 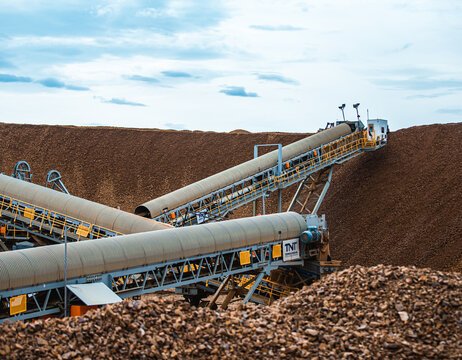 Gold recovery
The leached gold is adsorbed from pregnant leach solution in carbon in solution columns, followed by desorption, electro-winning and smelting to produce gold doré. 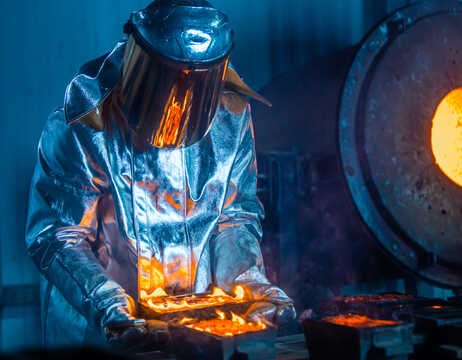 Environmental considerations and diligence have been key since the very beginning of Gross’s design and construction. From the outset, our objective was to ensure Gross represented an industry leading example of environmental stewardship.

The Gross leach pad and associated drains, ponds and waste storage facility were designed in accordance with industry best practice and include the impervious permanent pad base consisting of a COLETANCHE® five layer membrane laid over a compacted base.

The five layers consist of an anti-root film, a glass fleece, a non-woven geotextile, an elastomeric bitumen binder and finally a layer of sand.

Explore the fascinating world of plants and animals of Gross Region 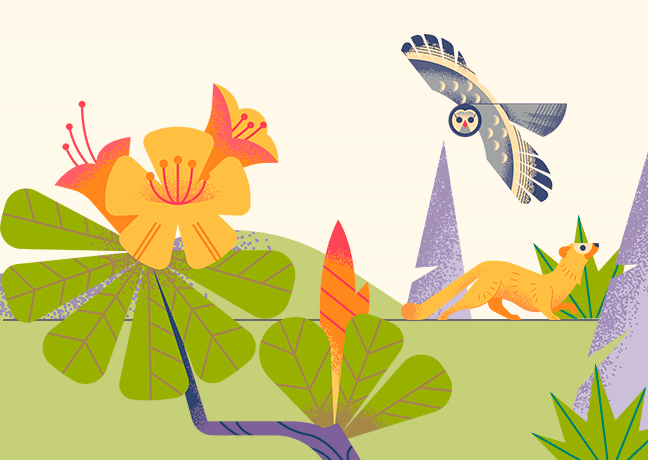 As with all its operations, Nordgold engages with the local community within the framework of social and economic agreements; community needs and concerns are discussed, and then actions to be taken are formalised by the resulting agreements.

Targeted financial assistance has been provided to the Olekminsk District for more than 10 years as part of Nordgold’s social and economic agreements with the local administration, the nomadic tribal community Tyanya, and Tyanya National Nasleg. In 2013 — 2021, more than US$500,000 was transferred to the local communities under the agreements. Additionally, the Company provides targeted support for local events, festivals and celebrations.

There are no specially protected natural territories or cultural heritage landmarks within the limits of licence sites.