Nordgold Publishes Annual Report on Payments to Governments for 2016

London, United Kingdom, 30 June 2017 - Nord Gold SE ("Nordgold" or the "Company"), the internationally diversified gold producer with operations in Russia, Burkina Faso, Guinea and Kazakhstan, is pleased to publish its Report on Payments to Governments for 2016.

The Report was prepared in accordance with the requirements of the Disclosure and Transparency Rules Instrument 2014 ”Report on payments to governments“, issued by the Financial Conduct Authority.

In 2016, Nordgold’s total economic contribution (defined as capital investments, salaries, taxes, royalties, dividends and other community investments) increased by 3% to US$594.1 million. This includes US$113.1 million paid in taxes, dividends and payments for infrastructure improvements to the governments of countries in which it operates. This amount is based on the Report on payments to governments accounting specific standards.

Community contributions and capital investments («capex») are an important part of the total economic contribution. Nordgold substantially increased its capex in 2016 to US$243.0 million, up 24% from 2015, as it continues to develop its international operations. Key major projects included the completion of Bouly mine construction in Burkina Faso and ongoing construction of the new Gross mine in Russia, which is on time and on budget, and scheduled to begin production in mid 2018, as well as development of the Montagne d’Or project in French Guiana.

Nordgold paid nearly $170 million in salaries to its over 8000 employees worldwide, a figure set to rise as it brings new mines on line. In addition, in line with its commitment to creating shareholder value, Nordgold paid over $66 million in dividends to its investors.

“Nordgold is dedicated to creating value for all stakeholders and being a genuine partner to the communities in which we operate. A strong code of corporate and social responsibility is central to our licence to operate. We continue to firmly believe in the significant contribution our industry can make to host countries. While we are now a private company, we remain committed to openness and transparency and will continue to provide updates on our Payments to Governments. We look forward to further progressing our development pipeline, delivering on our commitment to the local communities and creating value for all our stakeholders.” Nikolai ZelenskiChief Executive Officer of Nordgold 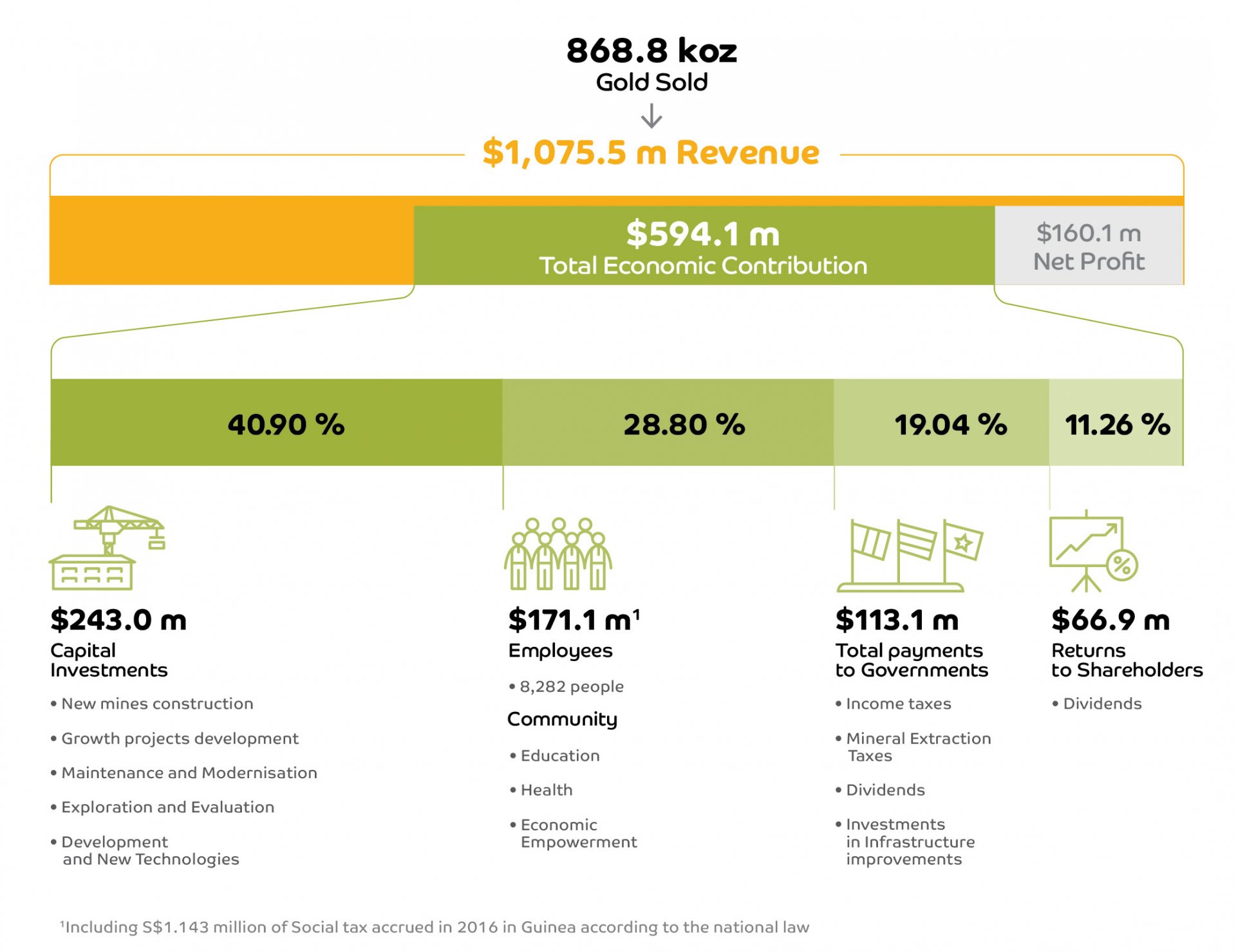 Nordgold is an internationally diversified gold producer established in 2007. Nordgold has a proven track record of operational excellence and benefits from a significant international development pipeline. The Company is relentlessly focused on shareholder value, committed to running safe, efficient, profitable operations, which enable it to generate strong cashflows and in turn, continue to invest in its pipeline of new growth opportunities while generating returns for investors. In 2016, Nordgold produced 869 koz of gold.

Nordgold operates 9 mines (4 in Russia, 3 in Burkina Faso and one each in Guinea and Kazakhstan). It has one project in construction phase (Gross in Russia), several prospective projects and a diverse portfolio of early-stage exploration projects and licences in Burkina Faso, Russia, French Guiana and Canada. Nordgold employs over 8,000 people.